x
by Jessicalle
on May 6, 2014
under Get the F*&% Out!, Letters from Costacalle, Ranting & Raving
tagged addiction, ceiling fans, clarity, desire, dialogue, hope, investments, passion
∞ Permalink

Never invest in something you love.”

The answer has changed the question. Memories drum up a whoosh of blood to ears. Heat squeezes sweat into my hands out of the heart-pounding silence between hellos and how are yous. As if it never happened.

The shock of your passionate plea; quieted by the year that passed between us. The realization that the open wound of our hope had healed, instant scar tissue.

That clarity, nearly as painful as the weeks we woke and rose from bed simply because that is what we must do.

The day you called maybe three months in or six. The time the dam broke and anguish flooded the line in a rush of tears, gush of words. Please, I can’t do it. Primitive sounds only resembling words instinctively understood. I can’t go on. I can’t do it. I can’t. It would have been embarrassing if it didn’t feel so true.

I really did. I really was. Until you called me on it.

I blamed her. Then I blamed you. Mostly I blamed myself.

I told myself I was better than you for being alone, unless I wasn’t. I justified his presence with hers or the fact that you hadn’t called in months. I figured you moved on. Like last decade. And the one before that.

“You’ll lose your ass every time,” you say. A bit more adamantly now and then to make it stick; you turn on your stern, mean voice. The one that reminds me why I left.

I prepare for the inevitable blow. The broken train that is our love. So tragic. But it doesn’t come.

This time I know we’re going to be okay.

“Don’t fucking do it,” you say again. 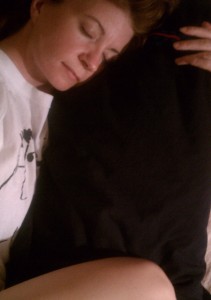 “I don’t think you’re right for him. Think of what of might have been.”