x
by Jessicalle
on May 12, 2014
under Letters from Costacalle
tagged bliss, cabanga, dangerous curves, eternity, family, guatuso, heaven is a place on earth, hope, light at the end of the tunnel, real life in costa rica
∞ Permalink

And we were all dead

But when I asked

They told me no

It’s only el campo (the country)

I was brought here

Accompanied to the edge

Everything I had known to be

Up to the place

Meets the sky and

You fly right up into the cloud bank

But you’re in a car instead of an airplane

The roads are bumpy in heaven for a reason

It forces you to slow down

All the way around

And around and around

Which you’re pretty sure

Judging from the road you’re on means

Pleading with you to be in the now

To what is happening right

In front of your eyes

Than if the journey had been easy

If the journey had been easy

How would you ever know bliss

You would never know bliss

If it was any other way

I have for why

Why the roads here

Unless you want to

And you have the utmost faith

In the vehicle that carries you

And I’m not talking about

The one with the steering wheel

And all this leads me to a place called Cabanga where I had my first real experience riding a horse, not to mention being a tourist in Costa Rica. We were led by a nice man I just met. A mutual family friend introduced us, so I wasn’t completely in the dark about him or the experience, but I never questioned it either. I trusted he would take care of me though we didn’t even speak the same language. He did. There’s a lot of trust getting thrown around down here.

His hand signals indicated that we were going for a little ride around the farm to see buena vistas (good views). After about a half-hour at around a 45-degree upward angle leaning forward on a horse whose only footing was the terraced hillside made of clay, frosted with slippery black sludge and laced with the permanent hoof prints of the resident cows so deep and wide they resembled stairs—I began to understand.

I also understood from the young woman riding on her own behind us that the word “Giovanni” neatly translated to “Help!” We were gone half the day but I was so far gone I didn’t even realize that was the guy’s name. Giovanni! 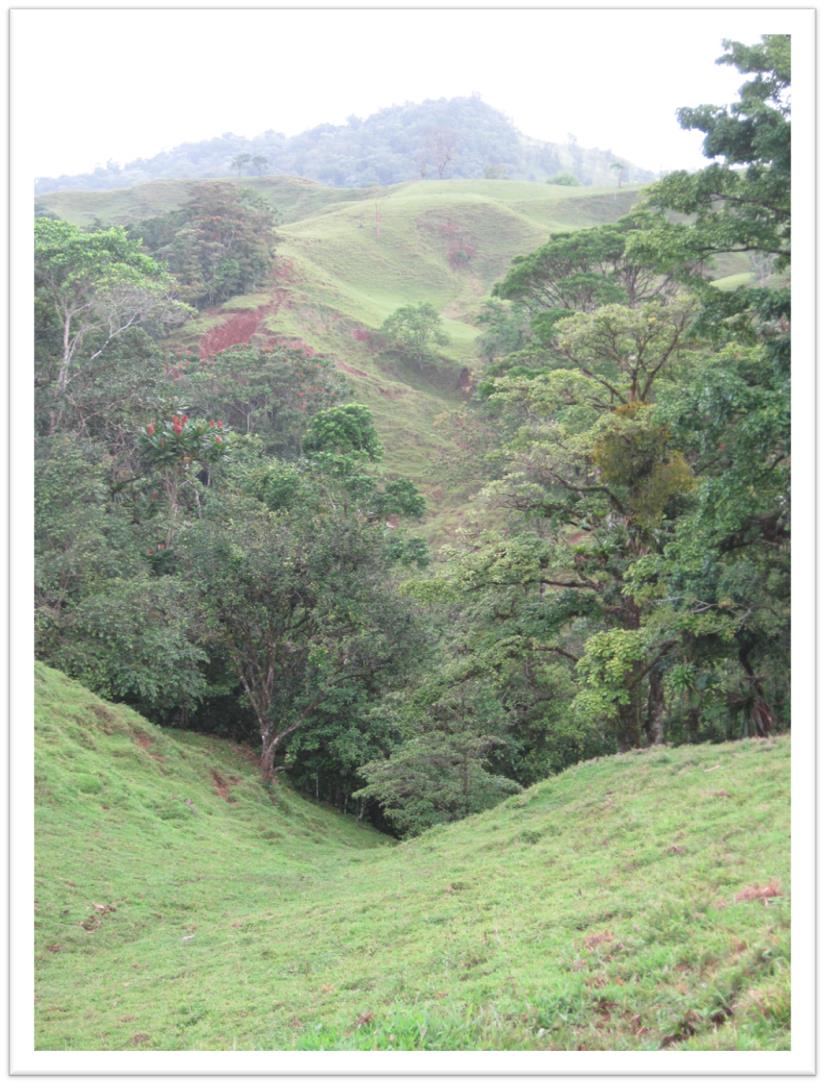 What I saw was so much more than I can possibly describe for you with images of endless rolling vistas in every shade of green that make mountains spread out button-size in front of your open-mouthed face. White puffies rolling past you at eye-level as you look out at the world from above them from the eyes attached to your swirling head.

This entry is called “Heaven is a place on earth Part 2” because I’ve just returned from another visit and I still can’t find the words. The caption in Part 1 pretty much sums it up in one line if you care to tread deep waters. “Funny how looking into eternity puts you smack dab in the middle of now.” Personally, I’m only just now learning how to float but that’s another story.

The hard truth is I may never be able to tell you exactly how it was riding atop such a sturdy beast led by a strange man whose muscles—bronzed from daily life in the sun—twitched under his sheen into the unknown in the hottest part of the day with a light breeze in my hair and pelo de gato (misty rain) on my face just enough to make it indescribably perfect.

I can tell you that what I saw that day was so far beyond my comprehension it has taken me a year to internalize and process it. I’m going to need a whole new lexicon. I was so busy observing I had no time to write about it—a good practice now and then. I have only short notes from the journal I brought for my stay. I hoped they would be inspirational one-liners but there were so many I feel almost certain I failed to capture the moment. Still, I’m hopeful.

It’s the main theme of this trip. Hope. I really had no idea what hope was until now. I actually thought it was the only thing that kept us from utter despair under the weight of all the sadness and pain in our lives. I thought it was the idea that at some point the pain would cease but no more than that. I hadn’t a clue what would come after. Hope to me was not a promise for a better, brighter future—it was solely a means to an end—a light at the end of the tunnel so we could see our way through the battle. Not that we would ever actually reach the end. Little did I know that the end is not only attainable, but we can leave the tunnel! We can go outside! I think I exited the tunnel somewhere around month six.

I’ll have to look back but I’m pretty sure that was the day I posted: “You know that moment right after you realize you’ve lost your mind?” It was just like that, you see. Leaving the things we’re used to, even voluntarily is soul wrenching even when the new thing is vastly superior to the thing you had before. That last battle—the draw between what we know to be true and what is staring us right in the face saying, “For the love of G-d, choose ME!” is so strong it can literally create a split personality. But that’s another story for another day.

This story is about the light. And by the way, you should really think about bringing a filter for your camera because the light here, which is already beyond brilliant and yellow possessing clarity so fine my camera can’t even catch it most days; was so bright then it hurt my eyes. In fact, I wore my sunglasses almost all the time at first. It took a good, long while for me to get used to the fact that this was how it was going to be. That this is my new normal.

Well, that’s enough for now and I still haven’t told you about the scariest night of my life so I should probably start keeping track. Until then, I hope you reach the light at the end of your tunnel, run out and greet the golden dawn of a brand new “normal” day.