Sometimes a painting is just a painting. Sometimes it’s more. Sometimes it speaks when you stop long enough to listen. Sometimes you recognize it in a crowd of strangers as a potential friend. Sometimes you meet and sit and after a while you realize you’ve found a life-long connection. That’s how it was with The Turnip and me. 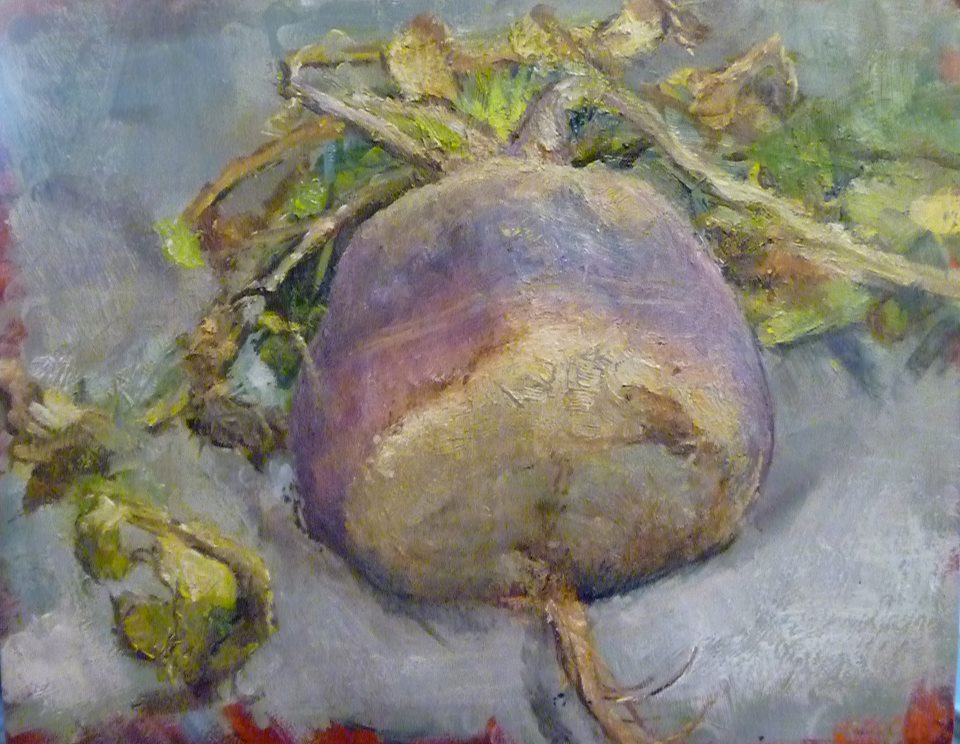 The Turnip by  Seth Camm

And that’s how it was sitting for Seth among the titanic greek columns of Mr. Santikos’ Palladium Theater/Bar where he is showing his art work and painting in the forward-thinking gallery spawned by the success of The Wonderland of America’s Bijou Theater, where his fiancée Rebecca Coffey is showing her art to movie goers who may or may not be intentionally seeking more from their entertainment than Hollywood has to offer. Can we just go to the movie now? Not yet, I’m still looking!

So, tell me how this works. What do I do?

Just sit there and look pretty.

Can I move? Look around?

Well, you can but not too fast or it’ll turn out blurry.

But staring at the faces of the ones who came before, I somehow felt unworthy. Still I was giddy. At home now, I’m certain I was wearing that “shit eating grin” my dad used to call the look my face when they fought. The one I put on when they inevitably said, “Wipe that smile off your face.” The one that turned itself down at the edges so even though I felt like I was smiling, it didn’t offend anyone because I appeared to be just as unhappy as they were.

And the first time I’ve ever seen what someone else sees when they see me.

Wow is all I can say. I know. I’m supposed to be a writer and all I’ve got is wow. To be fair, I’m in awe of this person before me. Of his talent. Of his grace. Of the way his eyes translate the world outside him to his hands in that esoteric language known only to trained artisans who practice attaining nothing less than perfection on a daily basis. Who continue with the daunting, joyful task of living and creating new things in absolute faith every single day of their lives for the pure joy of it. Because life would not be worth living without it and despite the fact that though they may reach seemingly unattainable heights they may be the only ones who recognize it and that has to be reward enough.

Can I get you anything?

A shot-gun, a twelve pack and a passing buffalo.

Would you settle for some chocolate?

But wait! I’ve been blue for so long. I want to be a different color now. I want to wipe that shit eating grin off my face and glow.

But I’m ready! I’m ready for my face to reflect how I feel inside. How rich, happy, loved and secure I am all by myself though it may not seem like it because I’m talking my head off like a teenager on three-way. I want to shine like the women on the wall. But are they really happy or does the master see something in all of us no one else can?

Someone enters the space. Someone who looks quite comfortable looking at art and in her own skin. Someone who doesn’t wait to be invited, is first to offer a smile and says, “I like your light.” Someone who means what she says in every way possible.

It was the best compliment I had ever heard given to an artist. It was a compliment not only to his work and his talent but his existence. Because the master uses light, needs light, reflects light and is light.

It may make a nice underpainting for something in the future.

In the shadowy outline on his canvas, I saw so much in me—so much potential for a finished piece. So much potential for a finished person—though we are all a work in progress. It was definitely me, or at the very least the me the people passing by could see as their eyes widened in disbelief. It reminded me of that fresh feeling you get when you step out of the shower and see yourself for the first time in the steamy mirror. You can’t see it yet, but you know you’re under there and all you have to do is sweep your hand across the cool glass to reveal it.

So many feelings in a glance. I had to look away. It was too beautiful. I practically ran outside to text everyone I know how awesome it was to be sitting for the master. The truth is I was afraid to see what he saw. I covered it up with small talk and giggles and he knew it too.

I lost the likeness of you.

I’m going down a path here that’s getting a bit steep, but sitting for the master always is isn’t it.

At home now, I realize I was afraid to see my own potential. But in that light, I felt that someday when I’m brave enough, I’ll look myself in the eyes and allow him to show me the beauty he sees. Until that day, I’m quite comfortable practicing my own perfection faithfully in perpetuity. I will continue with the daunting, joyful task of living and creating new things in absolute faith every single day of my life for the pure joy of it. Because life would not be worth living without it and despite the fact that though I may reach seemingly unattainable heights I may be the only one who recognizes it and that has to be reward enough.

Thanks for sitting for me tonight.

No thank you. It was an honor.